One of the best things about being human is to get to participate in good conversation or debate. Next best surely is to eavesdrop.

A new word kept cropping up for me in conversation in the last quarter of 2017.

Imagine my surprise when I heard this word, so unusual to me, come up on RTE Claire Byrne’s last radio show of the year.

The ham was boiling and so was I. I decided it was a ‘sign’ so I dropped tools, made a cuppa and retreated from the kitchen to listen. If you want to put on the kettle listen directly here – Claire Byrne talking to Simon Sleeman (a monk from Glenstal Abbey).

Or if you prefer here is my potted eavesdropped version.


Sleeman is saying we should seize this season to think about change and rebirth. He first heard about the concept of natality from Hannah Arendt a German Jewish philosopher.  According to Sleeman we have over emphasised death in philosophy and religion and not put enough emphasis on birth. He seems to be describing us as natals born to live rather than mortals born to die. Arendt, he says, is asking us to celebrate life - this life.  This invitation gives Sleeman energy and vitality. He spoke about his mother who is in her 80s. She has told him that when she dies she wants to be described as somebody who lived until… not died at …

Sleeman describes all these things as metaphors about how we live. If we live out of a concept of natality, he says, several things happen.

For one thing we realise that this moment is not an audition, this is a moment to celebrate to get the most out of.  We become focused on a beautiful landscape rather than facing a gloomy cloud in the foreground.

For another it gets us to reconnect with nature.  If we don't value nature we don’t recognise this is our common home with other creatures.

He recognises that we all speak out of a story – but a story into which we can implant this natality position - rather than inevitable death mortality one. Claire Byrne pointed out the church focus on death and afterlife.  That’s one version, he said, but he believes there is another version.

‘When advent comes around the chant all changes and somehow it leads me over the lintel of ordinary time into this advent experience. It changes how I feel. That is what liturgy is meant to do to us – we are meant to go in there and come out feeling different. Ritual is transformational - helping our vitality and natality. Life will bring you to the ground at some stage and you will inevitably ask - what is this all about. People are hungry for what is real and sustaining’.

Sleeman says God comes to birth in us at Christmas. He quotes Meister Eckhart.


'What does it avail me that the birth is always happening, if it does not happen to me?

Sleeman says it's not just locked into a single being Jesus - we are meant to become it. And we don't even have to project manage it. There is a divine artist who will work on us if we if we agree. It's an invitation. It's not mandatory.


Claire Byrne talked about the pressures of the season that they might perhaps be inured to in Glenstal Abbey and wonders what his take is on shopping and present buying.  He talks about fun, that presents are ways of connecting with people so long as we don't mistake it for something that is going to sustain us at a deeper level. Consumerism pretends that it can fill us up and is dependent on us remaining empty. It doesn't work and we know it doesn't work.
Byrne went on to discuss with him the British army career that he almost had in the footsteps of his father.  He described time spent in Belize.  He described coming back to visit Glenstal and in his legs he felt something happening - through the ground he felt an invitation.

She asked him did he ever feel like leaving and he says of course he has many times but something always brings him back.  He doesn’t make Glenstal Abbey sound remotely inured from the stresses of life. He tells her that living with 30 men in a fake mediaeval castle trying to keep the whole thing going is not easy. 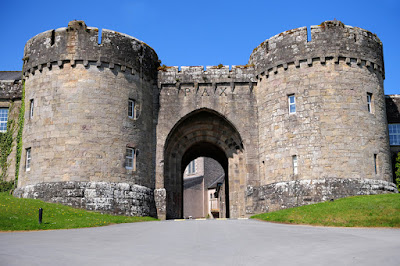 In the rush to the finish of the interview this engaging man seems to be describing that his overall objective is to get himself out of the way so that God can operate.

It’s funny how much more interesting all this becomes when it is not mandatory. For the rest of the day, despite the Christmas mayhem, I had an itch to google and hear more.  Late that night I went on a trail that led to another RTE presenter Marian Finucane interviewing another eminent Glenstal monk Mark Patrick Hederman early in 2017 about his latest book ‘The Opal and the Pearl’.


In the book he analyses the creative process in James Joyce, Iris Murdoch W B Yeats and Seamus Heaney.  If you want to take a break and listen - here is Hederman’s chat with Marian.


Or if you prefer, go to my next post in for my potted eavesdropped version.