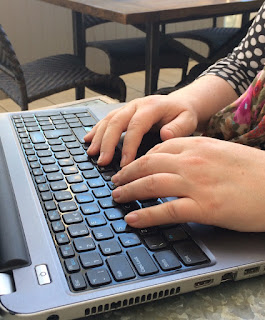 This morning in the Orchard cafe, writer Triona Walsh is busy developing the stunning plot for her second novel.
Meanwhile she challenges me to write a flash fiction piece, in 20 minutes, using the following prompts.﻿ 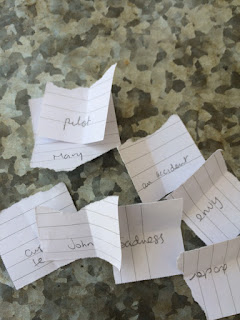 Mary stares into her cup of tea. It is grey – dish cloth weak – as weak as she could make it. The doctor said it was critically important to drink several pints of water every day. She can't face cold water - so her day revolves around enormous pots of tea. Half a teaspoon of leaves to one large teapot.. Dehydration was how sadness was affecting her - the doctor said. So Mary has a goal – one thing she can do - drink tea.

John and she can hardly look at each other since the accident. His thing is digging. The doctor said he needed to exercise. Mary has become paralysed but John has become agitated. He can barely contain himself. She can hear him digging now - the spade making contact with the stony soil of the garden. She hates the sound. The beds have been dug and re-dug. The vegetables have been harvested and given away. Every autumn leaf is being swept as it lands....... 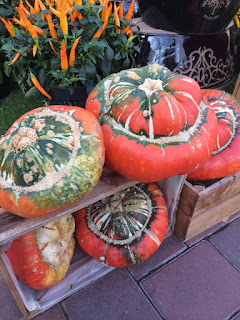 At 11 she will bring him a coffee. She will put it on the bench. She will put a biscuit on the saucer. She will watch from the kitchen as he breaks the biscuit and put it into the bird table. He will stand with his back to the kitchen window lest she might catch his eye. She will see how bony he had become and how his elbows stick out under his rolled up sleeves. She wonders if the day goes faster out there than it does in here. She envies him activity. They never speak now. She can focus on only one thing now - tea.


Both are trying to learn how to wait. When lunchtime comes she will put a sandwich somebody else has made out onto his bench. John will probably not eat that either.


On the hour, every hour, he will go to the radio he had set up on his bench and listen to the news. He will check his phone too for news on social media and emails.
Every hour. On the hour. He only allows himself to look once an hour.